Alsheikh family around the little food they could get during the food distribution. They come from Aleppo in Syria where the father worked as a gynaecologist until his hospital was bombed by the government forces after it was occupied by the Islamic State army. There are more than 10 groups plus the government forces fighting in Aleppo. They worried about their children’s future so they decided to leave their country where IS is forcing children to leaned how to fight. His life was also in danger if IS could find out that he was a doctor there. Already his wife’s brother who is travelling with them (in the back), had been injured by a bullet. The route they followed was: from Aleppo to Azaz by car, then they walked for 21km to the border with Turkey, after crossing they walked for 10 more km until the first village Kilis, then they went to Urfa by a small bus they rented, then traveled for 36 hours by local bus to Izmir where they met the smugglers who arranged for them to go to Greece. They brought them 70km north of Izmir where they crossed by boat to Mytilene island. That was three days ago and they have been in the camp for 2 days while they are waiting for their registration papers so that they can continue their trip. They thought that they would find better conditions in Greece so they where quite disappointed. Their final destination is Germany.
Refugee camp Kara Tepe near Mytilene city. It hosts Syrian refugees who are waiting for their registration papers that will allow them to stay in Greece for some time till they can move to an other European country. 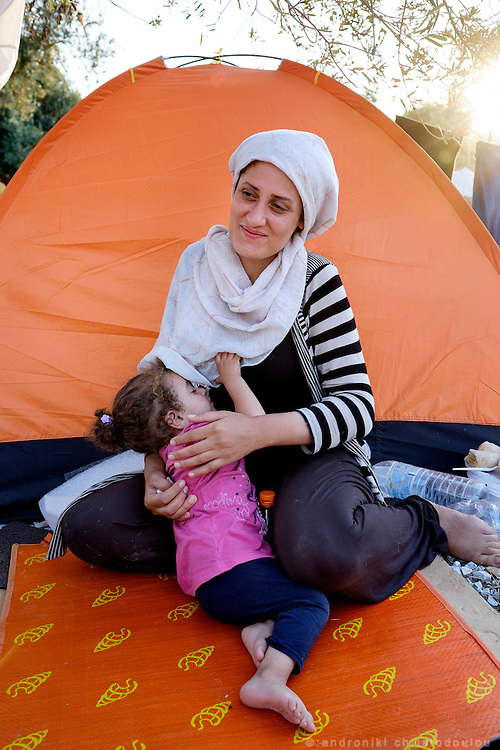