Vat Sarom (16) in a rehabilitation center of an NGO that deals with raped and sexually trafficked children. About one and a half year ago Sarom was living in a village bordering Thailand with her family. Her father had just had an accident stepping on a mine and her mother was pregnant, when a trafficker offered to help her get a job as a waitress at a restaurant in Siem Reap. She left her village and on the way the trafficker lied to her and instead brought her to Banteay Manchey province where she made her stay in a hotel, promising her that after that they would go to Siem Reap. There the woman trafficker sold her virginity to a man and forced her to stay with an other man for 3 nights. After that, instead of bringing her to Siem Reap, she sold her to a brothel at the village Sasda on the Thai border. There Sarom was locked in and forced to take 8-10 customers every night. To keep her awake and cheerful, the brother owner gave her drugs. These made her not wanting to eat or sleep and she was feeling happy without thinking any more. She was taking the drug every 3 days with the money she made of her tips. There were 14 girls in the brothel but only she and one more girl were underaged. She was afraid to escape because the owner of the brothel belonged to the military police and when some girls managed to escape, they were quickly caught and badly beaten when they were brought back. Eventually she managed to contact a relative of hers by borrowing a phone from a client and this way the operation for her rescuing started. On March 2007 and after she had spent 8 months in the brothel, the combination of a court decision, police pressure and the efforts of the NGO made the brothel owner release her. .Since then she is in the rehabilitation center, happy to be rescued but also very sad that all this happened, blaming herself for following the trafficker. She is trying to forget but she can not and instead she escapes in to her music, any music that she can hear from he 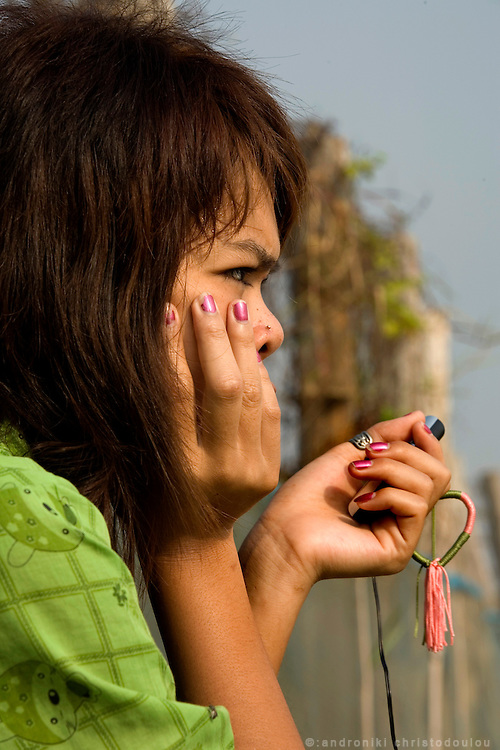